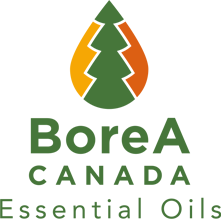 Boreal Forest, named in honour of Boreas, the Greek god of the north wind, is where BoreA Canada’s activities take place.

Boreal Forests cover about 30% of the world’s forested areas and store as much or more carbon as tropical forests. It is the biggest ecosystem on the planet. Thousands of species of wildlife inhabit this wide green band which is visible from space and which encircles the northern section of the globe.

The Canadian Boreal Forest spans more than 3 million square kilometres and covers almost 60% of the Canadian land mass from east to west and mainly in the north of the country. The majority of this land is unaffected by human activity (roads, cities, industries).

Softwoods cover 75% of the Boreal Forest in Quebec. The dominant conifers are black spruce, jack pine, balsam fir, white spruce and larch. They are particularly well adapted to the harsh boreal climate. Their conical shape reduces snow accumulation on their branches in winter, so they do not break under the weight of the snow. Their narrow needles are covered with a thick layer of wax protecting them from dry winds. There is also a wide variety of non-woody plants, the best known being blueberries and Labrador Tea.

Eeyou Istchee James Bay located in the Boreal Forest at the 49th north parallel is the site of BoreA Canada. Thousands of majestic lakes, wildlife, flora and wild rivers stretch over this region. The impressive nature is evident in the vigorous life, character, behaviour and culture of the northern peoples: Jamesians originally from Europe and the Cree from the First Nations, both populations live in harmony.

This region is characterized by long winters that are dry and cold (even very cold and windy) with short summers that are cool and wet. As expressed by the Jamesians, “y fait fret”! This is another way of saying that it is colder than cold, even cold enough to freeze exposed lips and thus the need to shorten the difficultly spoken words in order to be understood despite everything. Moreover, this hivernité, a neologism created by Louis-Edmond Hamelin, characterizes this ephemeral state experienced in the north and linked to the cold because of the relatively long northern winters. Even though they are cyclical, our winters modulate the behaviour and gestures of the people living in these regions.

BoreA Canada’s activity in the boreal forest works in synergy with nature, governmental legislative structures and other operators to be in harmony with the entire ecosystem. We are aware that this living mosaic is constantly changing, creating a continuous movement that we must take into account in order to maintain the dynamics of our circular economy.

The provincial government along with the Ministry of  Forests, Wildlife and Parks (MFFP), the Ministry of Energy and Natural  Resources (MERN), ensure sustainable management of the forest and control its exploitation through a precise and rigorous legislative framework for all the actors involved (logging, tourism, etc.). This allows for the control of the human impact on the forest while assuring the sustainability of the resources and a mostly natural regeneration of the forest.

BoreA Canada’s year round operation in the boreal forest is in synergy with nature, the governmental framework and all the other actors in order to be in harmony with the entire ecosystem.

FROM The Ministry of Forests, Wildlife and Parks : https://www.quebec.ca/en/government/ministere/forets-faune-parcs/

FROM The Canadian Wildlife Federation : WWW.HWW.CA

Balsam Fir: Straight From The Source

A LITTLE STORY FROM THE NORTH

A Jamesian explains to a tourist how to behave when confronted by different types of bears in Canada.