A resin with a fragrance that goes straight to our heart ! 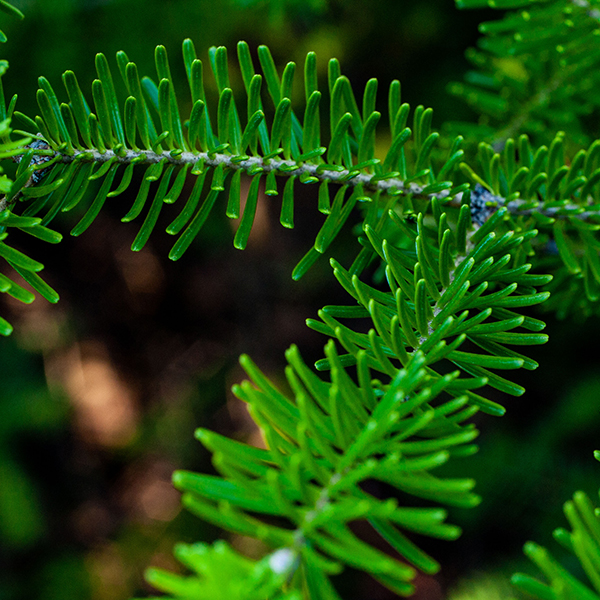 The Balsam Fir originates from the northern forests of central and eastern North America. This pyramidal-shaped conifer with its evergreen needles grows in various soils and climates. Like the Black Spruce, it is very resistant to the intense cold of the northern regions. It can reach up to 25 meters in height and live up to 150 years. It is distinguished from other conifers by its flat dark green needles, which are not prickly, but are fragrant, and which form two white rays when view from below. The bark vesicles contain a sticky, viscous resin called fir gum or Canadian white balsam or yet again Canadian turpentine.

There are many uses for conifers coming from the First Nations which are listed in literature. The First Nations, the Sisters of Providence and even the famous Hildegard von Bingen, used the Balsam Fir to treat cuts, ulcers, rheumatism, kidney pain, chronic respiratory ailments or like a tonic. This Canadian Fir is anti-scurvy. The bark was also widely used by the First Nations in a decoction or as an infusion for internal problems such as tuberculosis or diarrhea. The Ojibwa used the fir resin added to tallow or fat to make a pitch to seal their canoes. The Europeans used fir gum in optics to attach lenses because of its high quality of transparency.

Balsam Fir is the iconic Christmas tree for many Westerners. At the beginning of the Canadian winter, its slightly sweet resinous fragrance with its hint of grapefruit overflows in homes bringing warmth and happiness during the festivities of the holiday season.